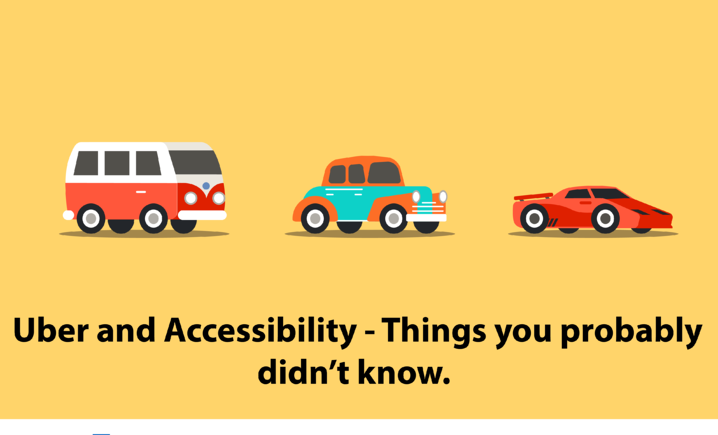 Recently I was talking to a friend about an experience that she had in an Uber. We were discussing a recent trip that she had where she was notified before the journey that her driver was deaf or hard of hearing.

She was asked to put in the destination beforehand and to text any inquiries she had to her driver to make it easier, ingenious. This peaked my interest and I wanted to know more about the driving service that has revolutionized the way we travel around cities.

After a little research I found that Uber released an update for their Partner (Driver) app, this notifies the driver with a flashing screen as well as the audio prompt they would have received before. This coupled with an alert for the passenger enables a hassle free experience, was I impressed? Yes.

For blind or visually impaired users Uber has VoiceOver iOS and wireless braille display compatibility. They have employed a consultant, Mike May, who has used the technology in 4 countries and 10 cities across the world with his service dog to ensure that the platform is easy to use for all.

“I work closely with Uber as a technology consultant to test their VoiceOver iOS compatibility and enhance the Uber experience for riders who are blind or visually impaired. As a blind rider, I know what a game changer Uber has been for many people. My goal working with Uber is to help ensure that the technology continues to be a great transportation option for the blind and low vision community.”

Not only do they believe in their efforts, they enforce them.

“Any report of discrimination will result in temporary account deactivation while Uber reviews the incident. Confirmed violations of the law with respect to accommodation of riders with disabilities may result in permanent loss of access to the Uber platform.”

Initially the ride share platform came under fire for not being accessible for those with disabilities. But it has to be noted the way that the company operates now is incredibly impressive. More companies should look to Uber as a benchmark for adapting technologies and training to move towards a truly diversified workforce.

You can read Uber’s blog here